Water Cyphers: Art, Performance, Science and is a pilot for an international arts training, outreach and mini-festival program focused on sharing water stories through theater, music and dance. Along with community members and artists from Kochi and Kollam, our international team gathers stories, creates dances and writes music that illuminates these critical concerns.  Public performances at Amrita University on August 12 at 4:30pm, August 14 in Kollam and in Kochi on Aug 24 and 25.

Rag and Beth practice kalari with coach Arjun. I wish the picture were clearer, but – no joke – I couldn’t hold the camera because my hands were slicked with sweat.

This week we took the movement and music pieces we created as individuals, in pairs and as a group and began to arrange them so they – in essence – “act like a river.”  We hope the different components ebb and flow in a distinct and interesting way – avoiding too much movement, too little movement or stagnation.

We work from 10am-5pm and from 7:30pm-10pm and all of us sweat profusely – especially me.  We have to move quickly and each day is full of rehearsal, filming, costume fittings, more rehearsal. Kanta, our director, suggested take a kalari (pron. like “calorie”) class for some movement inspiration.

Kalaripayattu is martial art form created between the 2nd Century BC and 2nd Century AD.  It is by far the most difficult physical experiment my body has experienced.  In fact, if you look at the floor in the picture to the left, you can see the pools of sweat/dignity that I left behind.  It’s debated which Hindu deity created kalari – Shiva, Agastya or Parashurama – but no matter, I’m sure all three had a good laugh at my ridiculous attempt.

A fishing boat outside Amritapuri Ashram.

On Thursday, we moved to Amritapuri Campus and Ashram – the site that will host our first performance scheduled for Wednesday, August 12 at 4:30pm.  It will include the piece we’ve been working on called River to River and a student piece being created as I write this.

The chancellor of the University and founder of the Ashram is a very famous Hindu leader in India called Mata Amritanandamayi Devi – better known as Amma (the “hugging saint”.) Her form of darshan (blessing) is to hug everyone who asks. It is estimated that she has hugged nearly 50 million people worldwide and sometimes hugs people in succession for more than twenty hours.

[NOTE: Tune in next week to hear about our experience meeting/hugging Amma.]

Amma hugs a devotee on her North American tour.

We are not allowed to take pictures inside the ashram, but you can read more and see images on their website here. A large percentage the people at the ashram are from other countries so it is a very international center. There are classes in yoga, kalari, meditation, indian singing and other practices of Advaita Vedanta. If the schedule allows, I’m hoping to take an indian singing class before I leave.

In River to River, there are many musical moments beginning to evolve, including a really beautiful shoka ganam (sad song) that Sen’s Malayalam language teacher wrote. If you click here, you can hear Rag practicing (with me attempting to sing Indian scales in the background – eek!) Also, I wrote a story song called Who’d You Rather Be? I’ve included those lyrics below.

Morgen (on the right) walking along a path by the ocean, near Amrita.

Another member of our team, Morgen Chang grew up in Hawai’i and now lives in Minneapolis. When she was interviewing people on the Kochi Beach, she was reminded of of the difference in perspective between those who travel frequently and those who live their entire lives in one locale – or, in this case, by one body of water.

“Hawai’i is small and we use the mountains and ocean – mauka and makai – to give directions. For instance: ‘That’s on the makai side of the street.’ When I moved to MN, I thought: there are no mountains and there are little “makais” all over the place. How will I know where I’m going? It never occurred to me to use the sun. Or even a map!”

I asked Morgan about a water memory from her child and if anything has changed.

This picture, taken by Morgen’s sister, is a view of her home island of Oahu.

“Growing up, there was a stream behind my grandmother’s house that my sisters and I would play in.  I remember it full of ducks and fish and crayfish.  A lot natural waterways in Hawai’i have been paved to prevent erosion and flooding.  But when the sun hits the pavement, it heats up and kills the fish which sends the wildlife other places as well.

“That stream means a lot to our family.  When my dad died, we scattered a few of his ashes there.”

Kripa (center) dancing with her classmates in workshop.

Meet Kripa.  She is studying Business Management at Amritapuri University and is one of the performers who participating in our workshops.

Kripa grew up in Kolkata.  “When I was in elementary school, I would somedays leave class and go to a nearby pond to feed the fish. The pond was near a temple and people began to throw different worship items (garlands, incense, candles, boxes) in the pond when they were finished with them. Not long after, the fish began to die. I organized some friends to help clean up the pond, but there was too much. The garlands and garbage suffocated the pond.” 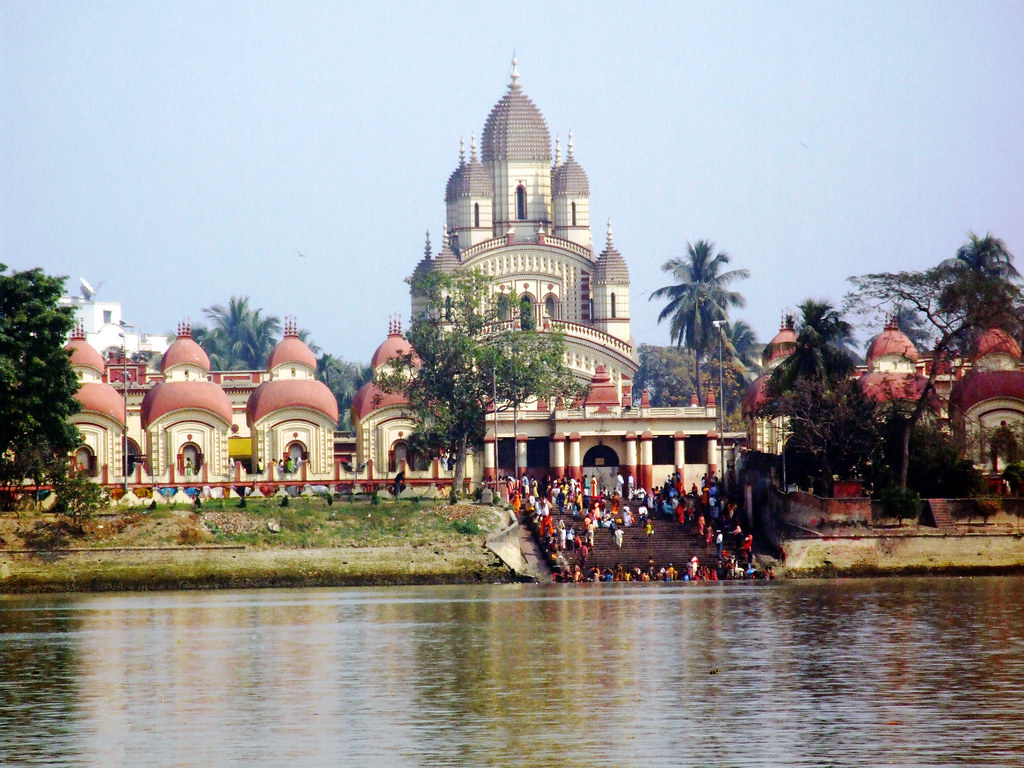 People bathing in the river outside Dakshineswar Kali Temple.

There is another very famous temple on the Hooghly River called Dakshneswar. When she was little, people would bathe in the holy waters of the river.  Kripa wanted to put her feet in the water, but it looked so dark and murky, she was hesitant.  Then, she saw a body float by.

“When we read about Ganges in our scriptures, we picture a beautiful river flowing with pure water.  But what it actually looks like frightens me in my heart. Sometimes, it’s difficult to talk about God/spirituality and nature, but I wish people would realize when their traditions are harming what God created.”

The shoreline outside Amrita.

I’m hoping to interview one of the professors or staff at Amritapuri in charge of their waste management program, but time may not allow.  V. Krishna, Director of International Guests, told us how Amrita University, Kerala has spent a lot of time engaging the community around the University and Ashram to be creative with pollution solutions, but it isn’t easy.  There is still a lot of pollution. Amritapuri recently won a prestigious Bill and Melinda Gates Foundation proof of concept grant.

Brian Arbogast, director of the Water, Sanitation and Hygiene team at the Bill & Melinda Gates Foundation wrote: “By applying creative thinking and new approaches to sanitation challenges, we can improve people’s lives. And we have no doubt that these new partnerships with India and South Africa will help us achieve this.  We believe that with governmental leadership, new business models and innovation, we can dramatically increase the progress made in tackling this global sanitation crisis.”

All of us were pretty sad to leave Le Linda’s (or as we call her Linda Chichi – Sister Linda) as her food kept getting better and better each day.  The variety of flavors, textures and colors was a real insight into Kerala cuisine.  Plus, Linda would often sit with us and sing songs or tell stories.

When we reached Amrita, the Guest Director Krishna was very excited to take us to the Western Canteen.   We respectfully suggested (perhaps too many times) that we’re very happy to eat at the Indian canteen.  I’m not sure he realized how much all of us love Indian cuisine.  In the end, we were able to enjoy both – Western espresso and omelets and Indian lunches and dinners graciously provided by the University.  Sometimes, we treat ourselves to the Indian restaurant half-way between the campus and the ashram called – get this – Lakeview Restaurant (on the river).  It sounds like a lodge you’d find in Northern Minnesota.

Before leaving Kochi, we visited St. George’s Cathedral.  St. George’s is India’s oldest Syrian Catholic church, built in 594 AD. It is a very popular religious destinations for Christians and non-Christians and it is tradition to offer chicken or eggs as a gift.

St. George is a myth that is speculated to have roots as far back as Late Antiquity and the story of Horus and Setekh, but primarily tells the story of a small town named Silene where a dragon (or it has been suggested, an alligator) has made its home around the spring which provided drinking water for the town.  Every day, the people of the town would appease the dragon by offering it a sheep or goat.  If there were no sheep or goat available, the townspeople would offer a young girl.  One day, when no sheep, goats or young girls were available to sacrifice, the princess was offered up.  George, traveling through on his crusade, happens to arrive just in time to slay the dragon and spares the princess. The people of the town see this as a sign and convert to Christianity. 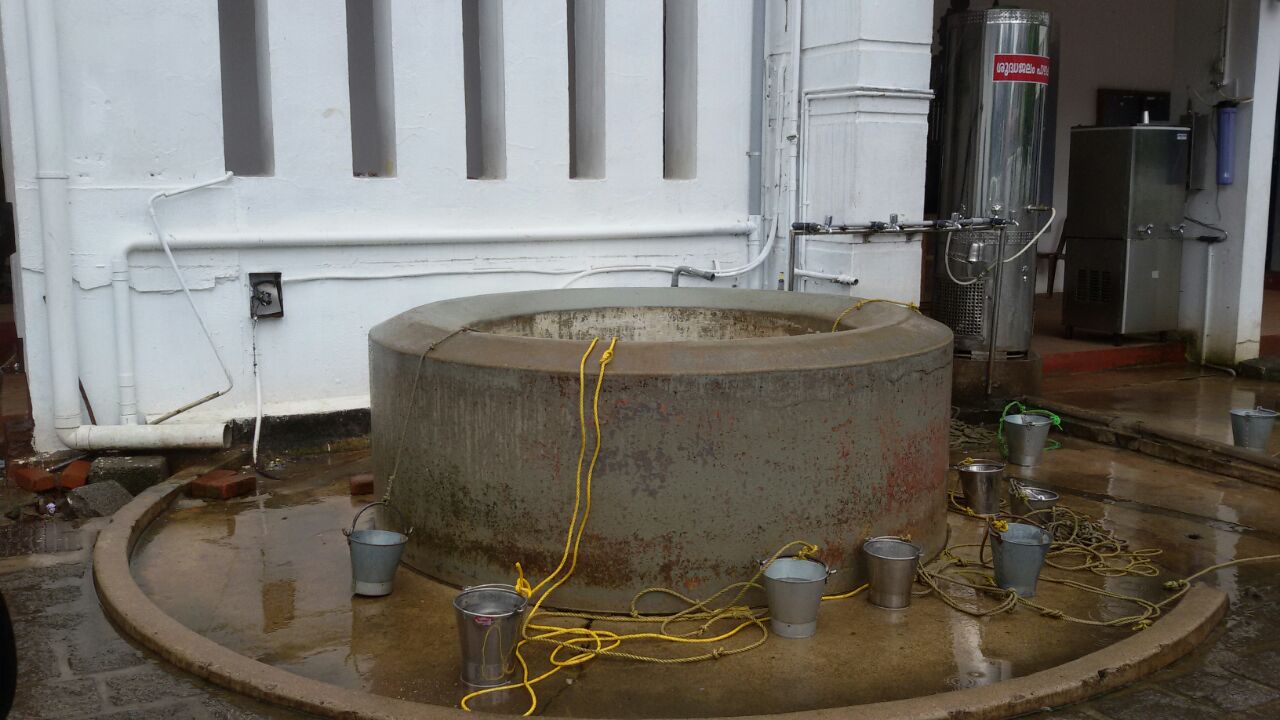 art of church (pictured) was finished this past April and has a combination of European and Keralite architecture. It one of the largest in India with a built up area of over 88000 square feet with an alter composed of over 36 kilos of gold.

The church courtyard holds a well and devotees believe the water in the well has curative powers.

WHO’D YOU RATHER BE?

Well, I put down a vessel in the mighty Mississip

For to find my fortune on a mighty river trip

I started at the headwaters, clarion and cold

I tried to stake a claim in her, but every one was sold

So I took my little boat a week or two downstream

And I settled in a city they were callin’ Saint Louie

Every man was thirsty there for somethin’ good to drink

I took that river water that was clearer than the sky

And I printed on the label: “I have healin’ properties!”

I printed on the label: “I have healin’ properties!”

I thought another factory might surely do the trick

Several years there after on a trip to New Orleans

I met myself a creature that provoked in me a scream

“I was once a fisherman who fed his family

It’s that I was your best costumer

Drinkin’ up that water that your factory had made

“Drinkin’ up that water, friend

But not what’s in them bottles, friend

What’s spewin’ from your shops!”

I retired my vessel from its mighty river trip

And I cashed in my fortune from the mighty Mississip

But in my little story here, who’d you rather be?

In my little story, friend, who would you rather be?