A weekly update of the activities of artists from Interact Minnesota (Artistic Director Jeanne Calvit, Story-teller Kevin Kling, Actors Lhea Jeagar and Dominic Zeman and myself) as we create musical theater with the staff and artists at RICD/Interact Thailand.  Interact Theater’s mission is to create art through radical inclusion that changes society’s view of disability.

The famous piano building of RICD

Jeanne, Lori, Dan and Kevin bow to the actors.

We couldn’t have packed more into this week. Along with tech rehearsals (adding costumes, lights and sound in two days!) and opening The Love Show, we had a barrage of dinners, special visitors, meetings, recording sessions and last-minute shopping. There was barely time to sleep.

On Monday, Lori Leavitt, Interact Minnesota’s Development and Marketing Director (recently turned Interact board member) visited us during a coincidental family trip to Chiang Mai. It was such a delight to have Lori and her husband Dan here experiencing first-hand the transformation happening with the Thai performers. 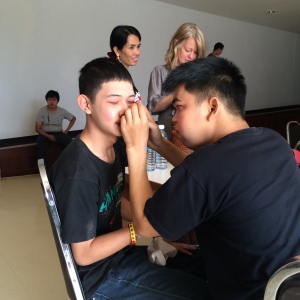 Gade and Tao prep for the performance.

It was interesting to see that the boys at RICD are much more into make-up than the girls. In fact, opening night reminded me of several middle-school productions I’ve directed where a group of unsupervised pre-pubescent girls came out of the dressing room proudly looking like “ladies of the night” from the late-1990’s. Here it’s primarily the boys. And they spend a LOT of time on it.

It also reminded me of sitting on a stool next to my older sister Rachel’s vanity watching with fascination as she curled, sprayed, fussed, colored, plucked, teased, applied, wiped, re-applied and was generally annoyed with me being there. For me, there’s always been something entrancing about people putting on make-up and what it does for them. Again, transformation. 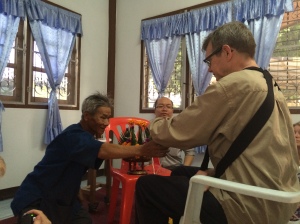 A ceremony for the return of Kevin’s spirits.

After rehearsal on Tuesday, the entire Love Show team (interns and all) went to have a special dinner at May’s father’s house in Mei Tang. The meal was rustic Northern Thai cuisine and included larb moo (both cooked and raw), namprick (chili paste), saa (beef tar tar) and gang tom kai (sour chicken curry. All of it, especially the pork tar tar in pig blood) was magnificent.

Before dinner, a Buddhist monk performed a ceremony to help Kevin’s spirits to find their way back home – the Buddhists believe you have 32 spirits in total and sometimes those spirits get separated from people because of trauma and accidents. The ceremony was to help Kevin regain the spirits that he lost in accident in 2001. The monk said they would be there waiting for him when he got back to Minneapolis. 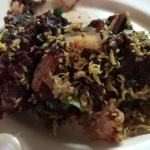 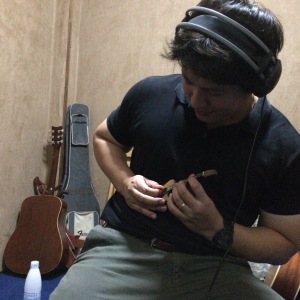 Pong getting a little slap-happy around the end of the session.

On Wednesday, we added the microphones. There’s nothing quite so special as a lot of children experiencing microphones in a resonant space for the first time. And nothing quite so peaceful as the end of that rehearsal. After rehearsal, Pong and I dashed off to his friend Pon’s recording studio to lay down some tracks of the show before I left.  In the next months, they will be producing a full recording of the show.

When we walked out of the studio at 10:30pm, Pon’s mom had a lovely dinner prepared for us. It was one of those moment’s where I truly wish I could have sat and savored the food a little longer – it was so delicious – but we had an hour ride home and an even crazier next day. Thanks, Pon and Pon Si!

Aaron with Pon outside the recording studio.

Thursday was our final day tech and, to the great credit of the RICD staff, it went swimmingly. Everyone was very relieved after. It was also our last chance to go the Waworot Market (one of our favorite places) to buy spices and coffee and other sundry. We only had an hour to shop as they close promptly at 6pm and start packing up around 530pm. As I walked along the back alleys of the market, the proprietors kept slamming down their metal doors as if to say: “We open at 5am! It’s your fault for running so late.” I managed to get a new suitcase which was my primary objective as my other suitcase is brimming with gifts, but didn’t really peruse like I love to. So many treasures. And with dinner often costing about $1 and a nice gift costing about $3-$5 it’s easy to get carried away. 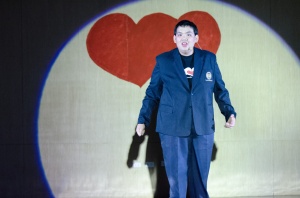 Friday, January 13 at 7pm we opened The Love Show to a huge crowd of friends, family, community and dignitaries. The audience reaction was amazing, especially to Ning Nong’s doctor sketch, Lhea’s amazing turn as Juliet (which really had me laughing from the piano), and, of course, Film, Future and Kong’s ‘Arroi! Arroi!’ rap had everyone clapping along. But it was really Aomsin as Mr. Valentine with Kevin Kling on harmonica that brought down the house. The crowd really went wild after his blues number “Mrs. Valentine” where he sings about how so many women give him attention: flowers and chocolates, but his heart belongs to Miss Thailand. Talk about a signature song – and it was entirely Pong’s idea. Way to go Pong! 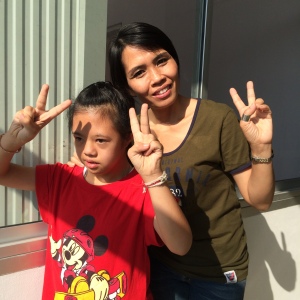 This week’s featured volunteer/performer combo is Mon and Fern.

Mon was a GREAT help during the show: translating, performing, instructing, helping with costumes. She was a super-volunteer. (She also played Miss Thailand.)

Fern is Mon’s daughter and has struggled for many years with stomach issues that have left her bed-ridden. She hasn’t know much more than the room in which her grandmother would take care of her.

Now that her health is better, it is very important to Mon that Fern start having a social life.

In Mon’s words: “Before RICD and Interact Thailand, Fern wouldn’t speak or play with other children. Sometimes, if they tried to play with her she would hit them. For the first time, Fern is looking around and seeking out other children to talk to. She’s learning words to songs gaining confidence to speak up. Fern’s favorite part of the show is most definitely the rap song ‘Arroi! Arroi!’  She knows all the words and sings it at home. Now, she wakes me up every morning and asks to go to the theater. Fern can’t wait for the next show.” 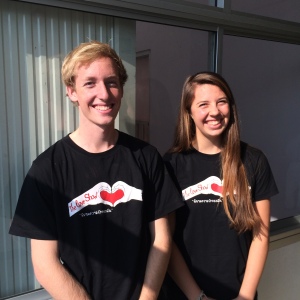 Carly and Will are our interns from the Spring Semester in Thailand program. They have spent their afternoons with us since week one learning blocking and music and helping wrangle the younger performers.

Carly Richardson is from San Fransisco, California and goes to school at Westmont College in Santa Barbara where she studies Kinesiology. In her words: “I love Interact’s model of radical inclusion and working with a group of actors with such a large range of abilities. At first it was challenging because it was so professional and we had to help everyone learn things so fast, but now that everyone knows the show it’s really fun. It’s nice to form relationships with people.  ‘m really impressed with Ning Nong and Tan – how they work so hard and make their story the center of the play and at the center of the program.”

Khim teasing Will at dinner.

Will Thompson is from Orlando, Florida and goes to Covenant College in Lookout Mountain, Tennessee where he studies Sociology. In his words: “I’ve really enjoyed watching the process because I’ve never done theater and it was really fun to see things from the inside out. Working with the staff and children was amazing. Watching the music and poetry come together from scratch and enabling the actors learn and perform it really rounded out the experience. I have to say, I really connect with Khim. She’s so funny. I’m really grateful for this experience.”

This is great because last year, Khim would barely speak with anyone and was very stubborn. This year, she knows all her blocking and rarely needs some one to cajole her.

It takes two to tango! Lhea and Dominic in The Love Show

Lhea and Dominic are visiting performing artists at Interact Thailand from Interact Minnesota. They have done an excellent job rolling with the punches being that there have been a bevy of last-minute changes and the majority of the show is in Thai. They’ve embraced the culture, the language and their new friends with aplomb.

Lhea, in her words: “My favorite part of being in Thailand has been working on the show. I’ve always to play Juliet and now I finally got a chance to. I’ve loved learning the Thai dances with Tan and learning to say things in Thai. The Thai songs are difficult, but I’m trying my best. Sometimes the food is a little spicy.”

Dominic and Lhea on the set.

Dominic, in his words: “I’ve never been to a foreign country and I love Thailand. I love the people, the religions, RICD, the clothes, the shopping, the cooking classes and Christoph and DJ. I think a way to connect with God is to meet people I’ve never seen before and become attached to them.  It’s hard to split apart though. I love to dance, so I’m glad I get to dance with people in the show.”

Last (but certainly not least) I sat down with Dr. Samaii, director of RICD and spoke with him at length regarding his thoughts about Interact Thailand.  In July, Princess Maha Chakri Sirindhorn will visit the hospital and see an abbreviated version of The Love Show.  Something we all hope Interact Minnesota can be a part of. Dr. Samaii, because of his vision and dedication, has provided a once-in-a-lifetime opportunity for these young and gifted performers. Six years ago, none of this would have been thought possible.

“RICD Music and Drama and Interact Thailand are revolutionizing how we think about treating disability because for the first time we are asking the community to be part of the treatment. The truth is, the community needs treatment as well. For centuries, disabled people in Asia only been seen solely as those who take from society. At Interact Thailand and RICD they are allowed to give and even more to inspire others with their gifts.

“In order to be successful, we must constantly be developing new ideas for how to help our community – like working with Interact Minnesota and the idea of radical inclusion. We must network with people from all over the world and help them set up similar community programs.  And we must collect date, create assessments and produce educational materials so the academic and scientific world has proof of our success.

“We cannot predict what will happen in life, we only have our hearts to guide us. We don’t know if our plans will be successful or not, but we have to try. The rest is up to the heavens.

“We can only do our best. And know we can do nothing by ourselves.  If you don’t have a friend to help you, you cannot share the passion, the success, the lessons and the failures. So, then first we must learn how to share.”

I could go on an on about this week as so much happen, but I’ll finish with some production photos (supplied by Pong) and let them speak for themselves.   I’ll have a follow-up blog next week, so look for more information to come!