A weekly update of the international collaboration between composer Aaron Gabriel (Interact Center for Visual and Performing Arts) and the artists at Rajanagarindra Institute of Child Development (RICD) as they create new musical theater in the spirit of radical inclusion.

Sun is smiling for The Dream Keeper photo shoot

On Sunday – week three – the sun finally came out, but everyone still wore four or five layers of clothing. I was in shorts and a t-shirt of course. There was a significant fear that I would get sick. Well…I didn’t get sick, but everyone else did. As week three went on, the number of student performers and staff dwindled until Friday when there were only about five of us here. Luckily, the plague seemed to pass over the weekend and everyone was back in action the following Monday. 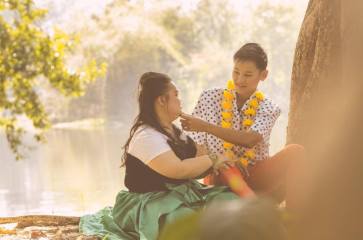 Photo shoot for The Dream Keeper

Throughout weeks three and four, we completed several songs including a fantasy song based on the question: If I could do anything I wanted, what would I do? There were many ideas including stretching like a rubber band into the sky, racing a turbo bike around Mars and eating at restaurants in every city in the world. We took all the ideas and combined them into a story about a little girl who turns into a balloon, takes a turbo bike into the stars and then plays badminton with a moon-rabbit. It’s a radical adventure and I’ve included the words for the song below.

On Wednesday, the students enjoyed a costumed photo shoot at Chiang Mai University. The weather was perfect and it shows in the photos. The light really grabs the luk thung-inspired color scheme.

We were also joined by several energetic new performers including Milk, Guitar, Bo, Mark and Sangtong. It was nice to add some new perspectives to the song-writing process. 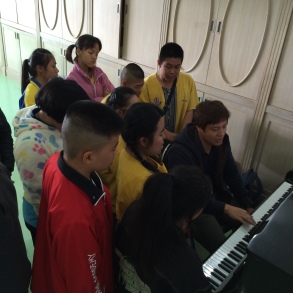 The performers rehearse The Baker’s Song with music director Pong

Director Gaew supplied us with lyrics and the new students composed a song about the joys of baking. We also community-composed a new song about going to college, finding love and finally getting a job that made “real money”. 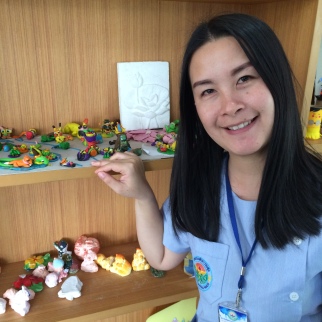 Newt shows some of the clay creations

Newt works in the Visual Arts area of the RICD Music and Drama.  (I have to apologize here.  I’ve been remiss in featuring the visual art staff at RICD and since half of Interact Center in Minnesota is visual art, I think it’s about time.)

Newt has been working at RICD for a little over a year. She studied at Rajabhat University in Chiang Mai and has degree in Art Education.

Newt wasn’t planning on working with people with disabilities. She assumed she would take a typical teacher track and be assigned to an elementary school, but one of her professors recommended that she intern at RICD.

“At first,” Newt confessed, “I admit I had NO idea what I was doing.  I didn’t understand disability at all.

“So I thought I’d stay at RICD for a little bit to bolster my resume. Time passed and my advisors were continually complimenting me on my work and the progress the students were making. The parents kept bring their students back to my tutorials and they added more students to my roster. Finally, I recognized this was something I was good at because I loved what I was doing.

“When I started, there were certain students I was afraid to work with – they appeared to be uncontrollable or aggressive. It turns out – because I’m patient and always consider long-term goals – I’m good with the most challenging students so now I look forward to getting to know them.”

Aomsin II and Jamesbond create melodies for the song ‘Badminton on the Moon.’

Aomsin II is a huge fan of the show Kom Faek.  He would love to play the lead character Saen because “he’s attractive and a good martial artist.”

Jamesbond has always loved watching performers and, at 32, is excited to finally try performing himself. He has always dreamed of writing songs like the Thai singer James Ruengsak so he’s excited to try the community song-writing exercises.

When he’s not song-writing, Jamesbond is at the races – motorcycle races to be exact. His father works at a car and motorcycle dealership so many of Jamebond’s lyrics revolve around vehicles.

FROM KERALA TO CHIANG MAI

On Saturday, I cooked a meal for May’s Mom. May is my collaborator Pong’s wife. May Mom (which is how I know her) is a great chef and makes time for a cooking lesson every time I’m here. This years cooking lesson included tam makua – grilled eggplant mash with shrimp paste, grilled peppers, mint and boiled egg.  (I’ve included the recipe below.)

For May Mom, I decided to cook a masala I’ve prepared regularly since I was in India. I brought the spice blend from Kerela where my Indian cooking teacher Linda “Chechy” Nicko hand-selected, mixed and ground them together. If you’ve haven’t been lucky enough to taste this mix, it’s perfection. Every time I taste this masala, I am reminded how fortunate I am to have such profound international experiences.

Throughout the day, I discovered that more and more people were coming to eat so it was exciting trying to estimate how much I would need to feed everyone. (I failed to get enough coconut milk even though I bought a huge bag.) To my surprise, I felt very comfortable with the backyard wok, the ingredients and cooking in front of an audience.

Linda’s masala at Pong and May’s

The food turned out really well and everyone complimented me by finishing their plates and eating their fill.  May Mom doesn’t eat at night so we saved her a healthy serving for breakfast.

Somehow between 11pm when we departed and morning when May Mom awoke, her masala was eaten by several ravenous individuals who will remain unnamed. Monday at RICD Pong told me the story and said: “This morning May Mom did that thing – what’s it called in English… you know, that thing just below yelling.”

One-year-old Please (Pong and May’s daughter) HOW AMAZING IS SHE???

Sorry, May Mom!  I promise to return to Thailand and rectify this injustice.

Mash together grilled garlic, shallots and shrimp paste. Once blended, add peppers and continue to mash. Then add eggplant and mash until desired consistency. Add salt to taste. Plate the mash, the quarter the eggs and add as garnish along with sprigs of mint. Serve with sticky rice.

I can not think of enough exclamations to describe the culinary adventure that was the Friday Night Muslim Market in Chiang Rai. Every single sample was bursting with flavor and pristinely presented. Several of the standard dishes like noodle soup or Burmese hushpuppies I had enjoyed elsewhere, but this small street of cooks achieved a whole new level of culinary delight. The piece de resistance was the fried sour rice salad with sour beef, green mango and betel leaf. After the meal, we spent an hour trying to figure out if I could go back before my flight the following Friday night at 9pm. Thank you Pong and May for always introducing me to the most exciting food experiences Chiang Mai has to offer.

BADMINTON ON THE MOON

When I float to the moon

No one notices me

I glide over houses and skyscrapers

Then my magic turbo bike appears

Everything glows in the earthlight

In the moon-dust I see a hundred of tiny pawprints

Leading to the feet of the Moon Rabbit

In his front paws he holds a mortar and pestle

“If you eat this, you live forever.

“I would rather play badminton.”

“Will you teach me, please?” he says

Setting down the mortar.

On earth I always lose.”

On the moon slow is fast. Fast is slow.

Here, you can move how you choose.”

“We need two to play.

I’d offer you mine, but what will I use?”

“This will work fine,” he says,

And so I serve.

Badminton on the moon

Is a wonderful time

No winners or losers

Only the joy of the game

I reply: “That would be so much fun.”

“But my family will miss me too much.

And I failed to tell them where I’ve gone.

I will return. I promise you that.

Moon-minton is my new favorite game.”

“No, you will forget me. I know you will.

“Every night when I look up, I will see you.”