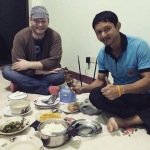 Thailand Update for the Week of January 26-30.

A weekly update of the activities of artists from Interact Minnesota (Artistic Director Jeanne Calvit, Story-teller Kevin Kling, Actors Lhea Jeagar and Dominic Zeman and myself) as we create musical theater with the staff and artists at RICD/Interact Thailand. Interact Theater’s mission is to create art through radical inclusion that changes society’s view of disability. 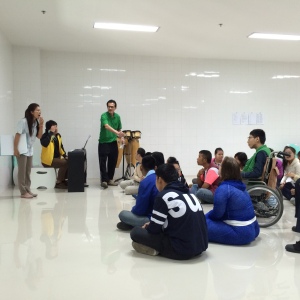 This week started off a little rocky as many of the artists (including me) were out sick with a cold.  Nevertheless, Pong and I kept working and finished the rest of the songs, Jeanne polished up the scenes and Kevin worked with several of the artists and staff on telling their personal stories.  Sickness can’t stop The Love Show!

This week we wrote a song called ‘Letters and Numbers’ for an autistic actor named Pi Pi.  Pi Pi has a wonderful voice and sees the world in a unique way.  I have included the lyrics below. Look for an artist feature on Pi Pi next week!

Over the weekend, the Americans traveled to Myanmar and Chiang Rai.  We spent two days shopping in the street market, visiting pagodas and wats and eating Burmese food.  (See more below.)

This week’s featured artists are Ting Li and Jip Joy.  I also interviewed the invaluable interns joining us from Institute of Physical Education. 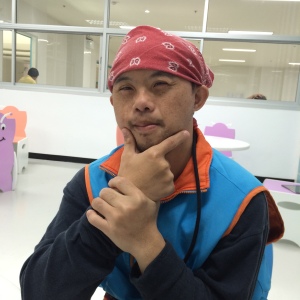 Ting Li was in the program three years ago and has joined us again this year. Normally he works at Ban Sanook or the Healing Family Foundation creating weavings, but loves performing.

In his own words:  “My favorite scene in The Love Show is where I play a tough guy who transforms into a kathoey (lady-boy).  That’s who I am.   I am very beautiful and feminine.” 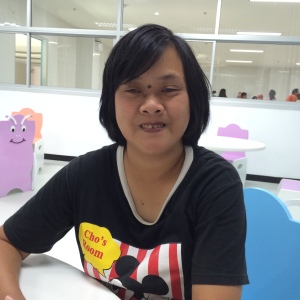 Jip Joy has been here two years.  When she’s not at Interact Thialand she works for her uncle’s construction business.

In her own words:  “I like dancing a lot.  I like when I do traditional Thai dancing and everyone is looking at me.  Sometimes, I wish people would look ONLY at me when I’m on stage.  In The Love Show I like the doctor scene because now I have learned how to talk to my doctor.”

From left to right: Mint, Keaw, Om, Benz and Pao

Our interns are doing their final year school residency at RICD.  Not all the interns are planning to work with disability or the arts – some are planning to continue their education, work for the government or become entrepeneurs – but they are all very excited about this opportunity.

Crossing over to Myanmar or Burma.

Mae Sai/Tachileik are the border cities at the northern most tip of Thaiand.  There are large street markets on both sides full of vendors selling shoes, jewelry, watches, videos, luggage, fabric, antiques, handicrafts and food.  There are also many hawkers pushing cigarettes, razors and viagra.   At one point, one woman came up to Kevin and tried to shave his face.

Since the tragic earthquake last March much of the market has been rebuilt and expanded.  It looks entirely different from how it looked when we visited a year ago.

In Chiang Rai, we visited Wat Rong Kung (the White Temple) and the new eco-tourism destination Singha Tea Plantation or Singha Park.  We also had a delicious lunch at Cabbages and Condoms – a Thai restaurant and resort chain dedicated to sustainable agriculture and safe sex. 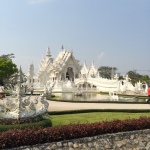 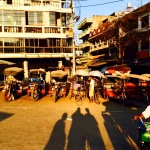 Condom salad (made with cellophane noodles, not actual condoms) 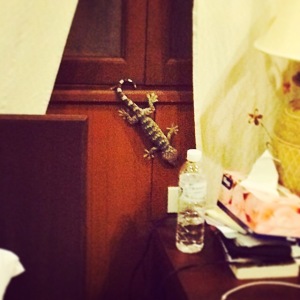 After an entire week of convincing myself the scratching sound coming from beneath my bed was “just in my head” Lizzy finally came out to play. Poor girl!  Hopefully, she’s in a better place now.

Trees are made of numbers

Rocks are made of letters

So are you and I

All things are made of letters and numbers

Minutes and hours and days

We are simply composed of characters

My mom is made of numbers

My aunt and grandpa, too

My friends are made of letters

Spelling love and hope and truth

All things are made of letters and numbers

Days and weeks and years

Letters and numbers remind us that

Things are not always as they appear