Water in Kerala: Art, Performance, Science and is a pilot for an international arts training, outreach and mini-festival program focused on sharing water stories through theater, music and dance. Along with community members and artists from Kochi and Kollam, our international team gathers stories, creates dances and writes music that illuminates these critical concerns.  Public performances in Kollam on Aug 14 and 15 and in Kochi on Aug 24 and 25. 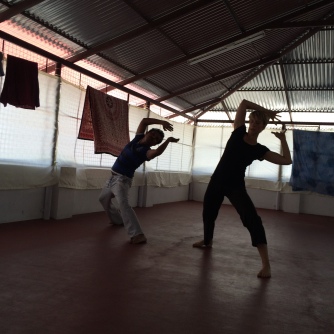 Rag and Beth form a movement phrase together.

Our workshops this week explored movement techniques like Laban movement analysis, modern and contemporary dance and Bharathanatyam –traditional Tamil Nadu dance-and the way these different techniques (and others) could be combined to tell water stories. Each collaborator brings different backgrounds, lenses and life experiences regarding their own personal water stories. As a first step, we explore our own stories through movement, dance and song. Kanta Kochher-Lindgren, our director, uses a variety of techniques to help us find a common vocabulary to express ourselves.

This week I’ve thought a lot about growing up in Northern Minnesota surrounded by thousands of fresh water lakes, streams and the powerful Mississippi River that bordered my grandparent’s farm.  I remember fishing for sunfish on Connor’s, midnight swimming under a crystalline sky and crisscrossing frozen lakes on ice-skates.  I ruminate on these things as I create my movement phrases, improvise a melody or write lyrics. 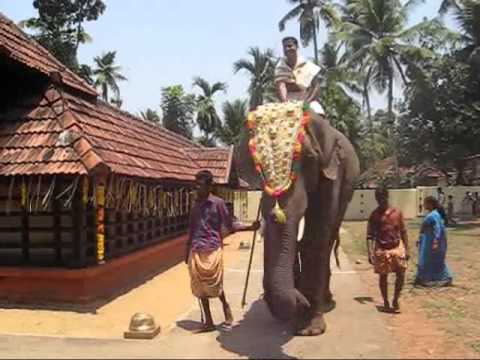 Our collaborator, Rag Saseendrababu grew up in Kollam, India on the Arabian Sea and remembers fertile rice fields, regular monsoon seasons (it’s only rained once since we arrived) and the pool in Sree Bala Subramanya Swamy Temple that drew water from the Thenmala Dam and returned it to the sea.

The Thenmala Dam is the second largest irrigation project in Kerala, India. It is the longest reservoir in the state and water is primarily used for power generation, but has also become an ecotourism destination, bordered on both sides by the Shendurney Wildlife Sanctuary.

A view of the Northern Cascades outside Arlington, WA.

Beth Graczyk, a contemporary dancer and choreographer from Arlington, WA (an hour north of Seattle) grew up in the Cascade Mountains and remembers how the well water smelt of sulfur. She recalls her dad building a trout pond so he could fish at his leisure.  “He wanted to build his own ecosystem,” she told us while she laughed.

As we explore, we work to find avenues where each collaborator’s voice is heard, encouraged and appropriately challenged so that their story is understandable and captivating.  If the story is clear, it’s easier to see how it fits into the whole.

By working this way, we hope to create an effective and culturally competent model that will allow community members (both performers and non performers) to tell their own water stories.  We want to insure our approach is thoughtful, respectful for those involved as well as exciting for those who come to listen.

Rag interviews a woman from the district north of Kerala.  She says garbage is buried near her house.

Part of our process included visiting Kochi beach, taking pictures and sound samples and interviewing people. Almost everyone was more than willing to share their stories and had a lot to say. Most interviewees blame the government and poor infrastructure for the pollution problems.

“Until we focus on our lifestyle and get the world to focus on it, we will not succeed despite all other measures being taken,” Modi told state environment ministers in April.

“[The Indian] people should set an example.”

Two men empty a bag of garbage into the Arabian Sea.

While we’re interviewing people, two men haul a swollen plastic bag to the ocean’s edge.  They empty the contents – various glass and plastic bottles – into the surf.  Then, one of the men flings the empty bag as far as he can into the water.  It returns to him on the next available wave.  He throws it again, turns quickly and joins his friend walking to the ice cream stand.

We approach them and ask them about the water.

‘The beach is full of garbage,” they say. “It must be cleaned up.” 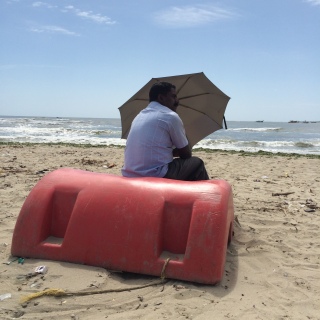 “Humankind is destroying nature, so nature has no choice but to destroy humankind.”

“NATURE HAS NO CHOICE”

Another man sits alone under his umbrella observing the waves.  His bench is a large portion of a plastic children’s playhouse that has washed ashore.

We ask him about the water.

“Nature and humankind are connected.   They are part of a balance.  Humankind is destroying nature, so nature has no choice but to destroy humankind.”

Beth reminds us of The Tragedy of the Commons – a phrase used to describe a situation where individuals acting independently and rationally according to each’s self-interest behave contrary to the best interests of the whole group by depleting some common resource. 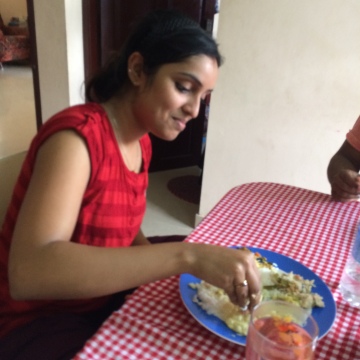 Our friend Nimmy shows us how to eat using fingers.

While we may not be able to drink the water, we certainly haven’t shied away from the food.  We are staying at Le Linda Homestay in Fort Kochin which also houses our rehearsal space.  Our host mom, Linda, is a very skilled chef (who also gives Ayurvedic massage with her husband and sister.) The food is extraordinary and each day is an array of perfectly balanced flavors.  Linda adds: “All natural food prepared the traditional Kerala way.”

In Kerala, it is customary to eat with your hands and our friend Nimmy is happy to teach the technique. Rice is particularly hard to eat by hand, but most meals are served with pappadam (a fried bread) that you add to the rice as a binding agent.

Rag and Sen wait for their hands to dry.

One day after dinner, Sen and Rag were sat at the table for quite sometime before washing their hands. When asked why they were waiting, Sen informed us that there is a local superstition that says the faster you wash your hands off after a meal, the sooner you will get married.

Both young men waited for the food to dry completely. 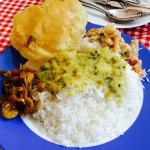 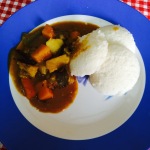 MORE ABOUT WATER IN KERALA